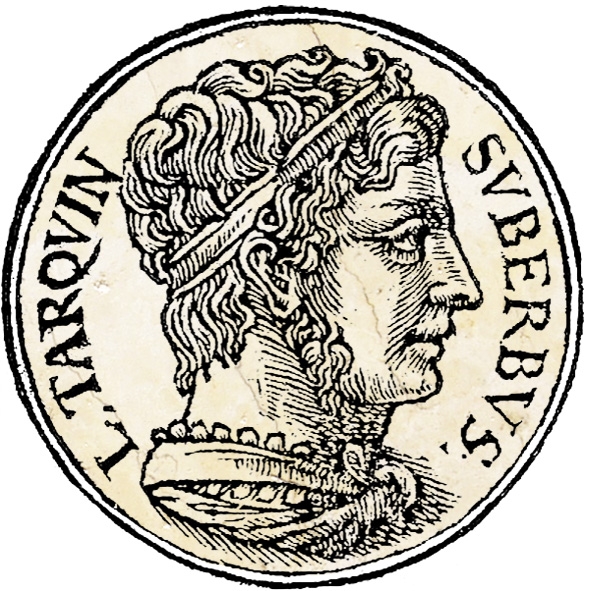 Married originally to one of the two Tullias, a daughter of King Servius Tullius, he eventually married her sister, the aggressive Tullia, who had done away with her unambitious husband and gentle sibling. Together Tulia and Tarquinius plotted the overthrow of the King and seizure of his throne. They committed regicide to do it.

Tarquinius, knowing the evil he’d done to achieve the crown, surrounded himself with personal bodyguards for protection against possible assailants.

After becoming king, Tarquinius was the first Roman ruler to proscribe senators who had been partisans of Tullius. He then slandered and murdered Turnus, a Latin chief, who resisted his claim to preeminence among the Latin tribes.

Tarquinius was a competent military leader. The king, having consolidated his power, made war on the Volsci. He initiated a state of hostilities that was to last two centuries. He took the city of Pomptine Suessa and lots of plunder (40 talents of silver) and gave himself a magnificent triumph. Some of the plunder went toward the construction of the temple of Jupiter Optimus Maximus Capitolinus on the Capitoline hill.

Tarquinius was by nature not just ambitious and devious, he was ruthless and disciplined as well. He and his son Sextus couldn’t carry the Latin city of Gabii by storm so they decided to take it by subterfuge. Sextus pretended to desert to Gabii because of his father’s tyranny. He then took a hand in leading raids, which were successful by design, against the Romans. After he had gained a position of leadership and trust, he proceeded to eliminate—slander, murder, intimidate—those men who were an obstacle to his rule. In this way Gabii fell to the Tarquinii without fighting a single battle.

We have repeatedly said that Tarquinius was ambitious and capable. He was interested not only in the greater glory of Rome but also of his name. Thus he engaged skilled craftsmen from Etruria and compelled the plebeians of the city to work on such public projects as the Temple of Jupiter on the Capitoline Hill and of the Cloaca Maxima in the forum. He also had them work on the construction project in the Murcia valley on what would become the Circus Maximus.

A Bad Omen Results in a Delegation to Delphi

One day a snake gliding out of a wooden column created confusion and panic in the palace. This was considered a bad portent. Superbus was concerned enough to send a delegation consisting of two of his sons and his nephew Lucius Junius Brutus to get an interpretation as to its meaning from the Delphic oracle. It is during this trip that Livy makes the reader aware that Brutus, perceived as something of a fool, is not what he seems. He was the one who understood the deeper meaning of the oracle’s interpretation and acted accordingly. That provided a divine basis for the profound changes that were to come.

Sextus Tarquinius, Superbus’ son, and some fellow aristocrats were on furlough from the seige of Ardea. They were being entertained by Sextus at a feast when they began comparing the virtue of their wives. One of those present, Collatinus, suggested that they visit their wives and see how they spent their time. The wives of most of the men were in the midst of feasting with their friends. Lucretia, the wife of Collatinus, was engaged in weaving with her maids. All of the men agreed that Collatinus had won. Collatinus then invited all of the men to remain as his guests. Sextus was “inflamed by the beauty and exemplary purity of Lucretia” and “formed the vile project of effecting her dishonor.” A few days later, Sextus returned to Collatinus’ house and raped Lucretia.

Lucretia called her family together, and after telling them her story, plunged a dagger into her breast. Lucius Junius Brutus then spoke of not only the dishonor of the rape but also of the tyranny of the Tarquins and the need to overthrow the monarchy. Thus the reign of Lucius Tarquinius Superbus, the last king of Rome, came to an end. 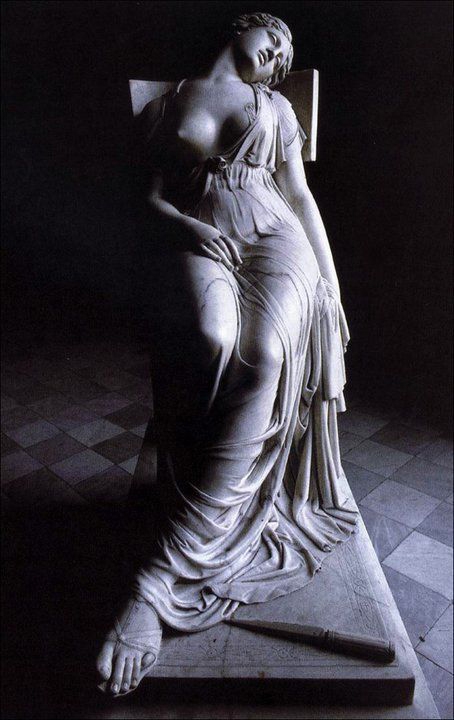 Dying Lucretia.
A statue by Damián Campeny y Estany, 1834. The beautiful young wife of Collatinus lies dying from a self-inflicted wound above her left breast. The fatal instrument (dagger) is at her feet. She committed suicide because she was dishonored by Sextus Tarquinius, son of Lucius Tarquinius Superbus. This event led to the overthrow of the Roman monarchy.
BACK
READ MORE
TIMELINE