Numa Pompilius, the second king of Rome was of Sabine Origin and was considered a wise legislator. His name “Numa” is associated with “numen” which means a spirit or divine power presiding over a thing or place. He used religion to control and shape Roman behavior. He claimed to hold nightly interviews with the goddess Egeria who gave him instruction as to the most appropriate sacred rites acceptable to the gods. (Egeria was a minor deity or a wood nymph. She had qualities similar to Artemis/Diana, the goddess of the hunt. Worshippers offered her libations of milk or water. She was also associated with prophecy and sacred prophetic books.) This was extremely important because, in those days, ritual had to be executed perfectly if it were to evoke the desired response from the gods. 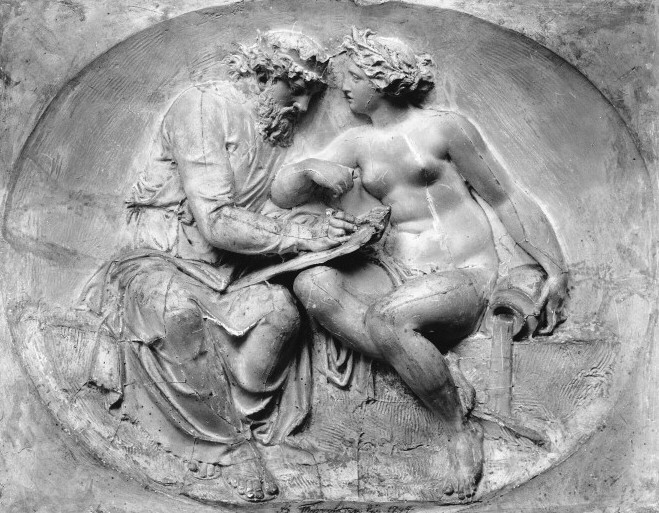 Numa Pompilius communing with Egeria.
This image is made of plaster and was executed in the classical style by Bertel Thorvaldsen in 1794. It shows Pompilius discussing a text with the goddess Egeria (a wood nymph).

Having thus obtained the kingdom, he sets about establishing anew, on the principles of laws and morals, the city recently established by violence and arms. When he saw that their minds, as having been rendered ferocious by military life, could not be reconciled to those principles during the continuance of wars, considering that a fierce people should be mollified by the disuse of arms, he erected at the foot of Argiletum a temple of Janus, as an index of peace and war; that when open, it might show the state was engaged in war, and when shut, that all the neighboring nations were at peace with it.