“Principate” is derived from the Latin “princeps” meaning first in order. It originates during the Roman Republic when it was applied to the status of the leader of the Roman Senate–Princeps Senatus. This appellation was first formally applied to Octavian*, adopted son of Gaius Julius Caesar, as a result of the First Constitutional Settlement of 27 BC.

The Principate was a quasi-constitutional monarchy, whose actual basis in power was the Roman military. This was a necessary condition for holding power, but not in itself sufficient. There had to be acquiescence of the aristocracy and, in particular, the Roman Senate. The examples of Caligula and Nero demonstrate what happened when a princeps lost the support of the Senate or the army or the Praetorian Guard.

There is one other institution and source of power and legitimacy that is necessary to the effective governing and the exercise of power in the Roman state under the Principate–the role of the princeps as paterfamilias, the head of the household. In the case of someone like Augustus, his familia extended throughout Roman society and the Roman world. It included all blood relatives, servants, friends, freedmen and slaves. It also included clients, men at the head of their own families who owed allegiance to a patron. A client might be a foreign King, a tribal leader, a senator, a knight, a merchant, a poet, the leader of a collegium, or even an artisan. This was not a constitutionally conferred power. It was validated by a tradition that reached back to the earliest days of the Roman state, perhaps even earlier. Under the law of the father, patria potestas, the head of the extended family held the power of life and death over its members. It was an autocratic form of power and everyone in his familia served the interests of the paterfamilias. At the beginning of the Principate, there was no formal imperial bureaucracy to administer the empire. It was expected that various members of a magistrate’s familia would perform these functions.

Despite serious shortcomings, especially during times of succession, this arrangement lasted more than 250 years. Formally the Principate actually lasted until the reforms of Diocletian (285 AD) when it was replaced by a new form of government; the Dominate. But we at Pro Romanis have discounted the 50 years between 235 and 285 AD, a time of civil war, fragmentation and social and political unrest, when the Principate was clearly failing.

Graphic: Gemma Augustea.There are different interpretations as to the meaning of this cameo. But it is thought to belong to a series of works, sometimes labeled “State Cameos”, created by Dioscurides of Aegeae and his workshop, Augustus’ favorite gem maker. It is generally dated to the first two or three decades of the first century AD.

Hover over the numbers for description.
Close
Meaning of the Gemma Augustea

There is a lower panel to the Gemma Augustea, not shown above. It represents an event that is connected with the figures in the upper panel. 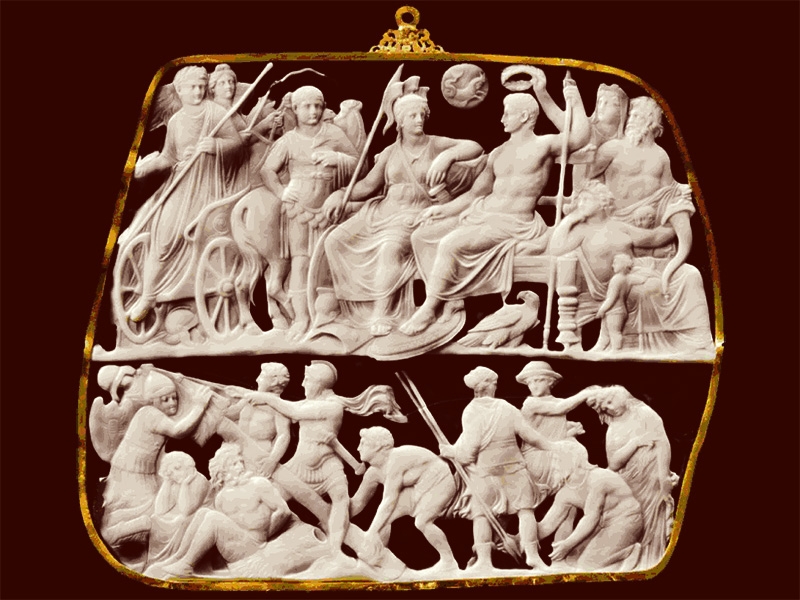 The figures in the lower panel are soldiers in the process of erecting a tropaion. A tropaion is a battlefield victory trophy. It is composed of a wooden cross surmounted by a battle helmet with breastplates and other enemy accoutrements hung from the cross. The captive figures are defeated barbarians.
The relationship between the two panels is reciprocal. The battlefield victory enables the position of the Roman leaders above and the Roman leaders—Augustus, Livia, Drusus and Tiberius—in their divine forms and relationships enable the victory below.