Carthage Expands On the Iberian Peninsula

After her defeat in the first Punic War, Carthage was compelled to pay a large indemnity to the Roman state. Consequently, she lacked the money to pay her mercenary army which had fought valiantly in Sicily. Nonpayment led to rebellion and acts of brutality by both parties.

After the defeat of the mercenaries, when the political situation was stabilized, the Carthaginians debated which strategy to follow in international and economic relations; 1) expansion in Spain for raw materials (primarily silver mining) and sources of military manpower or 2) intensive farming and economic exploitation of the African hinterland. The Barcid faction’s Iberian expansion policy won the day. Thus they fitted out an expeditionary force (to compensate for the loss of Sicily, Sardinia and Corsica) for Spain. Hamilcar Barca was appointed head of the expedition. His son Hannibal, then 9 years old, would accompany him. He would spend 9 years subduing various Iberian tribes and carving out a new Carthaginian possession. 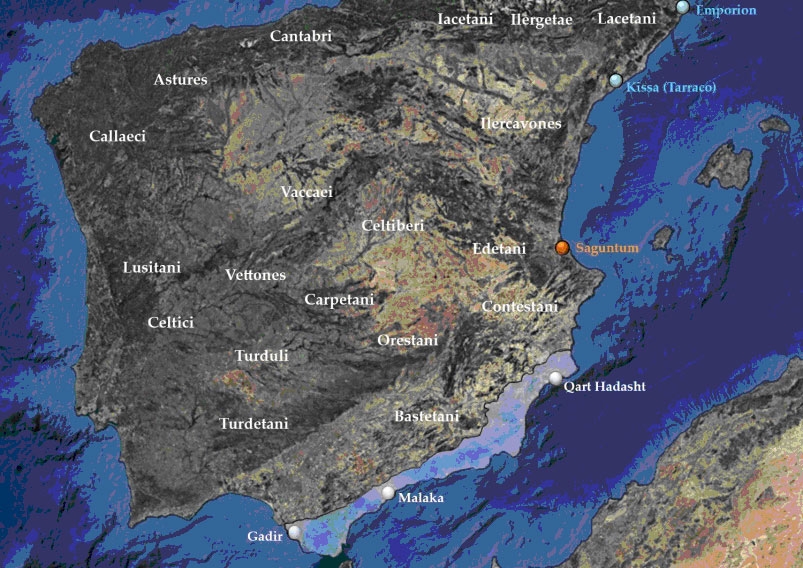 The Carthaginians (Barca Family) in Spain—238-229 BC
Compensating for the loss of Corsica, Sardinia and Sicily after the first Punic War, the Barca family expanded Carthaginian territory and influence in Spain.

Scipio was a brilliant Roman general from a powerful aristocratic family who never lost a battle in command of an army. He participated in battles against Hannibal at a young age. He was at Ticinus and Cannae. After the death of his uncle and father in Spain, he requested and received command of the Roman armies still there. Scipio won important military victories, and was able to change the strategic balance of the war by eliminating the Carthaginian presence in Spain within a few years. He was then able to take the surviving soldiers from the defeat at Cannae and mold them into an effective army with which he defeated Hannibal at Zama and thus end the second Punic War.

Background to the First Illyrian War

The Illyrian war was a consequence of the Illyrian rise to power. Agron, king of the Illyrians, a group of tribes around the city of Scodra and the bay of Rhizon, had a stronger army and navy than his predecessors. They made their living by piracy, deploying light quick ships (lembi) for the purpose. They had been doing this for a long time. But now they could supplement naval piratic activity with a strong land army; so instead of just raiding, the Illyrians could take and hold territory.

Demetrius, King of Macedonia (father of Philip V), recognizing this, hired Agron to help Medion, a town on the frontier of Acarnania, then besieged by the Aetolians who failing to persuade the people of the town to join their league, endeavored to do so by force. Agron responded with a force of 100 lembi and 5,000 men. He blockaded the Aetolians then attacked them. Subsequently, the Medion army sallied forth and also attacked the Aetolians, killing and capturing many. Shortly, thereafter, Agron died and his widow, Queen Teuta, continued his expansionist policy.

The reason why Rome got involved in the conflict with Illyria was because of piracy. After the First Punic War, the Romans, trying to safeguard Italian shipping in the Adriatic, were compelled to clear the sea lanes of Illyrian predators. Queen Teuta, King Agron’s widow, had allowed her sea captains to attack Italian shipping at will, sharing in the booty taken.

To further complicate matters, the Illyrians opportunistically took the city of Phoenice by subterfuge, defeating the Epirotes in the process. The Epirotes appealed to the Achaeans and Aetolians for help. A relief force was sent. But before the Illyrians and Epirote allies could come to blows, the Illyrians were recalled by Teuta to deal with a rebellion at home. In the meantime, Roman ambassadors arrived to complain of Illyrian interference with Roman shipping. One ambassador spoke too frankly for the queen’s liking and she had him assassinated. This event caused the Roman state to recruit two consular armies and 200 ships and settle matters with the recalcitrant queen. The Romans took the city of Corcyra, raised the Illyrian siege at Epidamnus and, including Apollonia, put these and other cities under Roman protection. The Roman invasion force then marched into Illyria proper and forced Teuta and her court to relocate to Rhizon. Demetrius of Pharos, a Roman ally, was given control the newly conquered Illyrian territory. Roman forces then retired to Epidamnus, with most of the Roman army and fleet sailing for Italy. A treaty was signed with queen Teuta whereby most of Illyria fell under Roman protection and she promised not to sail below Lissus with more than two galleys. This relieved pressure on the coastal Greeks and Italian shipping. The Romans then sent representatives to the Achaean and Aetolian Leagues explaining their actions. Rome was now involved, whether it wanted or not, in Greek affairs. 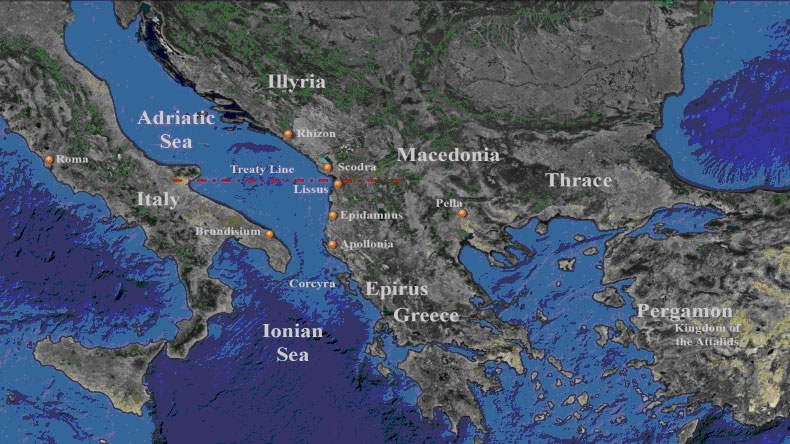 First Illyrian War — Treaty with Teuta
Because Illyrian piracy and expansionism threated Italian commerce, the Senate was compelled to solve the Illyrian problem. Teuta was essentially defanged at the end of the war.

The conflict between the Gauls and Italic people lasted, on and off, for almost 400 years. The Etruscans were dispossessed by them, the Romans humiliated by them, all Italians felt threatened by them. Before the first Punic War, however, the Romans and their allies had dealt the Gauls in northern Italy (the Boii) a blow from which it took them 45 years to recover. In 224 BC, however, a generation had passed and the Gauls saw Roman expansion in the Italian peninsula as a threat. They made alliances with Gallic tribes across the Alps and proceeded to lay waste to Etruria. The Romans raised a large number of armies to combat this threat. All of Italy participated.

Rome defeats the invading Gallic army at the battle of Telamon. Two consular armies (4 Legions of Roman citizens plus an equivalent number of allied troops), and the remnants of a third reserve army (originally 50,000 Umbrians and Sabines, with 4,000 horse) defeated by the Gauls in a previous engagement, forced the Gauls to fight a simultaneous two-front battle. The Romans had the advantage in numbers. The Gauls had a larger amount of cavalry. The Gaesatae fought in the first line against the legionaries of Lucius Aemilius Papus who had armed his infantry with spears usually used by the triari (the third line of a Roman Legion’s deployment). The idea was to take tactical advantage of the Gaesatae, who were fighting naked and had shields that didn’t cover their entire body, with missles and at close quarters with thrusting swords (versus the Gallic slashing sword).

Demetrius of Pharos, Roman client and King of the Illyrians, crosses the Lissus Treaty Line with 90 ships and begins plundering cities on the Eastern Adriatic coast

Most of the Illyrian tribes were led by Demetrius, tyrant of Pharos. He served under Agron (an Illyrian king with expansionist ambitions) and after Agron’s death Agron’s queen Teuta (who continued Agron’s expansionist and piratical policies). During the first Illyrian war he betrayed Teuta and helped the Romans defeat her. As a result, he was rewarded with kingship over most of Illyria. He became a client king of Rome. In order to consolidate his position, he married Agron’s first wife, Triteuta.

In 220 BC, Demetrius along with an ally, Scerdilaidas, a distant relation of Agron and Teuta, fitted out a 90 ship fleet and sailed south of Lissus, the point past which Illyrian ships were expressly forbidden to sail by a treaty with Rome, and began to plunder the Greek coast as far south as the southern Peloponnese. He also got involved in a conflict between Macedonia and the Aetolian League on the side of Macedonia. 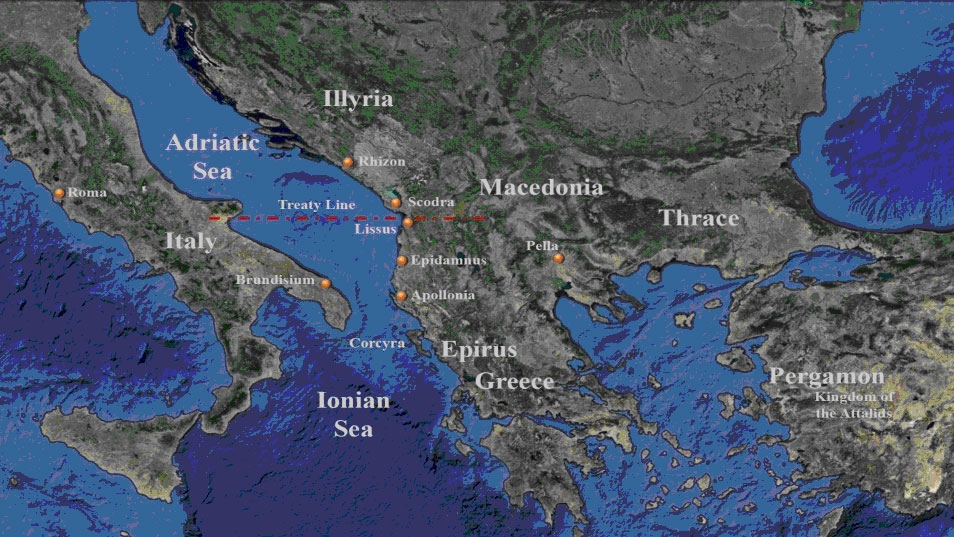 The following spring, in 219 BC, the Roman Senate sent an army to Illyria under the command of the Consul Lucius Aemilius Paullus. Paullus took Pharos by defeating Demetrius’ army, and the tyrant escaped to Macedonia where he was given protection by Phillip V of Macedon. The Romans demanded his extradition but Phillip refused.

Demetrius became Phillip’s trusted advisor and was probably instrumental in formulating some of the treaty provisions between Macedonia and Carthage.