After the death of Romulus, the Romans and Sabines (two tribes now living in the same city) competed to have one of their own number chosen king. During Romulus’ reign, Titus Tatius, a Sabine, had been elected king (here the Romans seemed to be employing a model similar to that of Sparta; 2 kings) along with Romulus. When he died, the Sabines agreed to be ruled solely by the Roman Romulus. Now, that Romulus was gone, they felt the Romans should reciprocate and allow a Sabine to ascend the throne, alone.

Numa Pompilius, whose first wife may have been Titus Tatius’ daughter, was living outside the city at the time. His first wife, Tatia, had died previously. Pompilius had a reputation as incorruptible and religious. He lived simply and humbly. It was at this time that it was said about Numa that he had not left Rome because he was despondent over the death of his wife, but rather to engage in a higher order of discourse; communing with the goddess Egeria.

When the representatives of the Senate approached Pompilius and offered him the crown, he initially refused. He had to be persuaded. And approval of the gods was sought.

Pompilius’ first act as king was to disband the king’s personal body guard, the Celeres. Then he began a series of calendrical and religious reforms.

The Roman year was divided into 10 months at this time. Pompilius added two more.

…she that has broken her vow is buried alive near the gate called Collina, where a little mound of earth stands, inside the city, reaching some little distance, called in Latin agger; under it a narrow room is constructed, to which a descent is made by stairs; here they prepare a bed, and light a lamp, and leave a small quantity of victuals, such as bread, water, a pail of milk, and some oil; that so that body which had been consecrated and devoted to the most sacred service of religion might not be said to perish by such a death as famine. The culprit herself is put in a litter, which they cover over, and tie her down with cords on it, so that nothing she utters may be heard. They then take her to the forum; all people silently go out of the way as she passes, and such1 as follow accompany the bier with solemn and speechless sorrow; and, indeed, there is not any spectacle more appalling, nor any day observed by the city with greater appearance of gloom and sadness. When they come to the place of execution, the officers loose the cords, and then the high-priest, lifting his hands to heaven, pronounces certain prayers to himself before the act; then he brings out the prisoner, being still covered, and placing her upon the steps that lead down to the cell, turns away his face with the rest of the priests; the stairs are drawn up after she has gone down, and a quantity of earth is heaped up over the entrance to the cell, so as to prevent it from being distinguished from the rest of the mound. This is the punishment of those who break their vow of virginity. 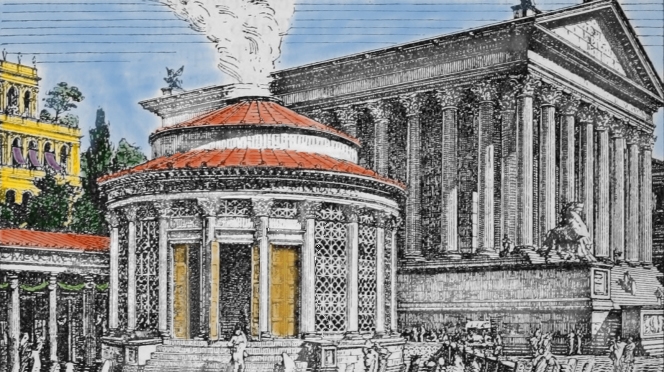 Temple of Vesta as it looked during the Principate.
You can tell by the Hellenistic style of architecture; notice the Corinthian columns. It is reasonable to assume that a preceding series of buildings dating back to the earliest days of the city occupied this space. The Romans were always rebuilding and beautifying their public and religious buildings. This was often the result of fires, which were a frequent occurrence. 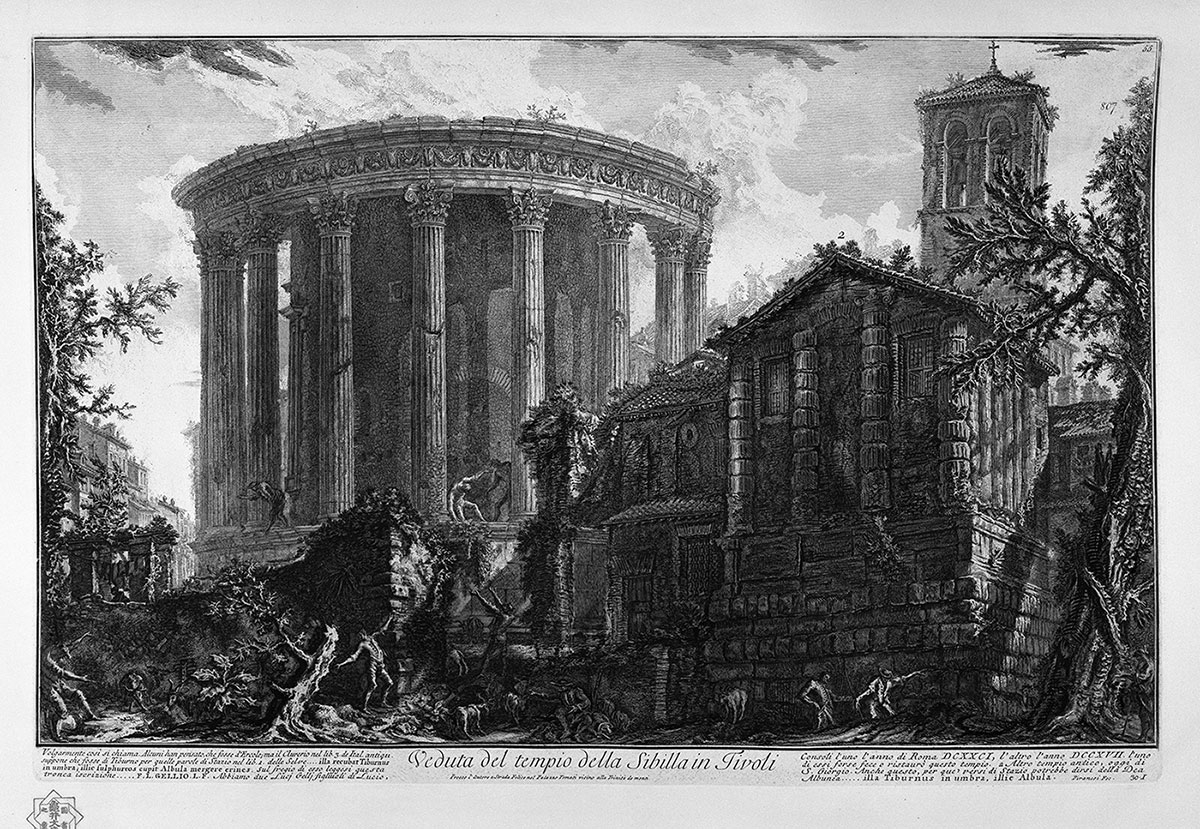 Temple of Vesta at Tivoli–ruin.
Illustration by Piranesi.

Janus watched over all doorways, including the doors of heaven. The doorway to a Roman house, ianua, was named after Janus (ianus). When a woman married, she ritually spread wolf fat on the door posts of her home, propitiating Janus, ritually beginning a new phase of her life as matron of her husband’s household. 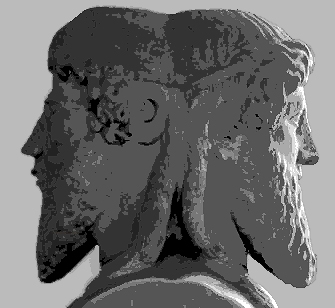 Bust of double-facing Janus.
This image is a posterized version of the sculpture in the Vatican Museum. Numa Pompilius named the first month of the year, Ianuarius, after Janus.

Named Janus Geminus (literally the double Janus), the temple stood in the Argiletum (a declivity between the Quirinal, Viminal and Oppian hills) next to the Subura district, just off the forum Romanum. When Rome was at war, the temple doors would be kept open. When there was peace, the doors would be closed. Tradition has it that Numa Pompilius had the doors of the temple closed because the city was at peace with its neighbors. 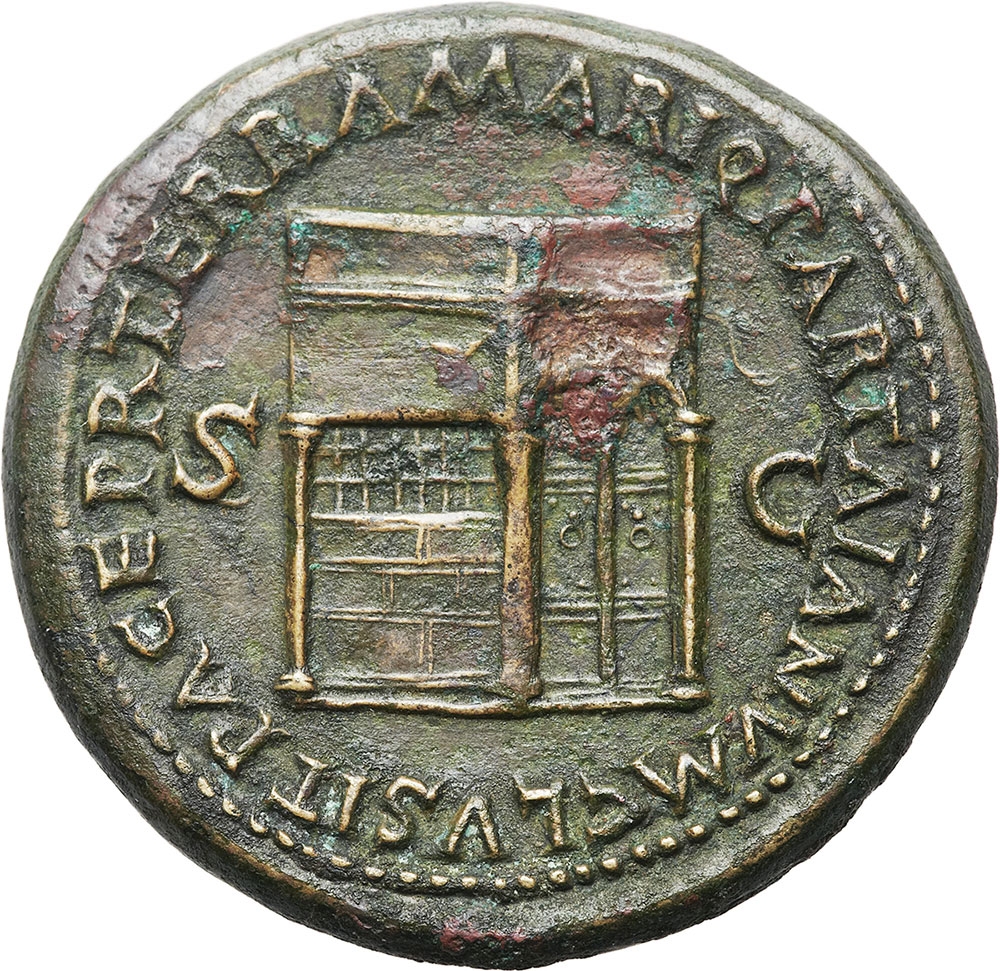 Reverse side of Neronian Sestertius–Temple of Janus.
Temple of Janus: built originally by Numa Pompilius. The temple depicted on the reverse side of this coin is from the time of the Emperor Nero. The temple was rebuilt numerous times as part of various building programs as well as the consequence of frequent fires. Notice the doors are closed. This means that the Roman state is at peace.

But of all his (Pompilius’) measures the most commended was his distribution of the people by their trades into companies or guilds; for as the city consisted, or rather did not consist of, but was divided into, two different tribes, the diversity between which could not be effaced and in the meantime prevented all unity and caused perpetual tumult and ill-blood, reflecting how hard substances that do not readily mix when in the lump may, by being beaten into powder, in that minute form be combined, he resolved to divide the whole population into a number of small divisions, and thus hoped, by introducing other distinctions, to obliterate the original and great distinction, which would be lost among the smaller. So, distinguishing the whole people by the several arts and trades, he formed the companies of musicians, goldsmiths, carpenters, dyers, shoemakers, skinners, braziers, and potters; and all other handicraftsmen he composed and reduced into a single company, appointing everyone their proper courts, councils, and religious observances. In this manner all factious distinctions began, for the first time, to pass out of use, no person any longer being either thought of or spoken of under the notion of a Sabine or a Roman, a Romulian or a Tatian; and the new division became a source of general harmony and intermixture.

Pompilius enjoyed divine favor, especially that of Egeria and the muses. He claimed to have received a palladium (the sacred shield, ancile) from heaven. This was a physical object whose possession guaranteed the continued wellbeing of the city. He was given credit as a religious leader and a lawgiver, in the mode of a Lycurgus. He established various priestly colleges and commissioned the building of the Regia. He brought the Vestals to Rome. Even more important, he corrected the Roman lunar calendar, placing it on a more rational footing.

Pompilius was a great civilizer. Where Romulus relied on force and war, Pompilius emphasized self-control and the rule of law. He broadened Roman culture and provided a foundation beyond mere force going forward. It would be enough to sustain Roman civilization for another 2,000 years.